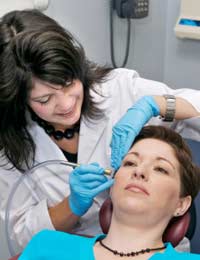 Everyone wants to look their best, but often that isn't possible if the skin on your face is either sun-damaged, scarred, pitted by acne or mottled with age spots. For people who have tried everything bar a face transplant, microdermabrasion may be the answer, a non-surgical procedure that can leave skin looking fresh and rejuvenated.

What Exactly is Microdermabrasion?

Like the name suggests, this method of skin renewal typically uses small abrasive crystals to take off the top layer of facial skin, leaving new, refreshed skin in its place. These days, a small device much like a sandblaster is commonly employed, which sprays small crystals of aluminum oxide across the surface of the skin. Like a harsh desert wind blowing particles of sand across your face, it works much in the same way a super-powerful exfoliant would. Cleaning, cleansing and revealing a fresh layer of skin.

Are There Other Names for Microdermabrasion?

Yes. It is sometimes called a Parisian peel, a power peel, particle resurfacing or derma-peel. Kind of like a chemical peel but without the chemicals used. And, unlike a chemical peel, the recovery time is much quicker and you usually don't risk turning into a lobster for the next three weeks. Remember when Sex and the City's Samantha suffered a harsh chemical peel, looking like acid had been thrown across her face? The results are different with microdermabrasion.

Not excessively, although it can cause some discomfort around sensitive facial areas, such as near the eyes, nose and mouth. It only takes less than half an hour, and most people say it's worth it! However, don't approach this treatment as you would a simple facial. In effect, it works by breaking down the top layer of the dermis, or skin, and causing trauma to it, causing it to repair itself in a better way. Sounds a bit rash (no pun intended).

Any Suggestions About Achieving the Best Results?

Make sure you have a qualified technician as results depend in part on their expertise and experience in administering the treatment. Check that all the crystals are removed from your face and be sure to use plenty of extra sunscreen for the next few weeks. People prone to facial redness might think twice about having microdermabrasion carried out.

How Much Does it Cost?

One session in a clinic or spa costs about £55 and up. A series of up to six treatments, carried out every week or ten days, is recommended.

What Types of Microdermabrasion are Available?

Microdermabrasion is a gentler alternative for people who don't want a chemical peel. A series of treatments can have lasting effect, treating superficial pigmentation problems, deep-cleaning and ex-foliating the skin, and making fine lines and wrinkles appear less noticeable. Just remember that your skin will be sensitive for several days afterwards if not longer, and avoid harsh sunlight for a while – and tanning beds!