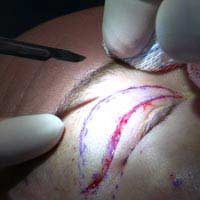 When it comes to plastic surgery, changing the appearance of one's eyes is perhaps one of the most popular procedures around. Many people seek to make their eyes look brighter and larger, which is usually achieved by a simple operation called blepharoplasty, or eyelid surgery.

Now, however, there is a new type of eyelid surgery, designed to make eyes look brighter, more open – and more Western. It's called Asian double eyelid surgery, or cosmetic blepharoplasty for the Asian eye, and it works by making the upper eyelid crease look more defined, and the eyes therefore not rounder.

Some people consider this type of surgery racist, saying that its main goal is to make Asian people look more like their Caucasian counterparts. Others say anything that makes people feel better about the way the look is okay. Who's right? As usual, it should be up to the person having the cosmetic surgery – or choosing not to have it – to make the final decision.

Upper eyelid surgery is relatively simple cosmetic surgery for the eye. Its goal is to make an upper eyelid that has a crease, known as a double eyelid, out of one that doesn't, which is known as a single eyelid.

Many people of Asian descent have eyelids with a crease already, some don't – the number is about 50/50. It is estimated that this surgery is very common in countries where "single eyelids" are common, such as Taiwan. In fact, it is the most common type of blepharoplasty performed there.

In the UK, double eyelid surgery is on the rise. Part of the reason is because when using a skilled surgeon, the procedure is relatively safe, with few complications and generally good results.

After administering a local anaesthetic only, the surgeon will make a small incision, then remove a tiny bit of fat and some tissue and skin. Fine sutures are then used to close up the incisions. They will be hidden under the folds of the eyelids, so that any scarring will not be visible.

Another method uses the use of a laser to take away the tissue and excess fat, while a third method uses sutures to actually lift the eyelid itself. A final method, generally considered the least permanent with the least desirable results, relies entirely on sutures to make the new crease.

Some bruising as well as discolouration may be evident immediately following double eyelid surgery – and you may temporarily experience blurry vision - but this should disappear soon. Make sure you get the end results you want by following your surgeon's instructions, such as:

A Word of Caution

If you are considering having any plastic surgery done, make sure you use only a Board-certified, licenced and accredited surgeon who has lots of experience doing the procedure you want.

Asian blepharoplasty is a highly specialised procedure, and you want to make sure that you not only get the results you want, but that you are not left with any unpleasant side effects such as infection or scarring.

Be aware also that initially following surgery, the eyelid crease may be higher than you would like. This is normal, and it should settle into position over the next few months.

Double eyelid surgery is a simple procedure that can change the way your upper eyelid looks. Some people believe it's a racist idea; others believe it's a godsend. The choice is up to you.