Home > Other Treatments > What is Septorhinoplasty Surgery -Special Nose Job? 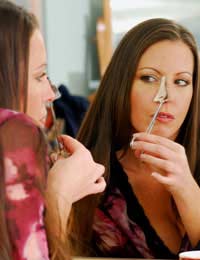 It may sound like something to do with seven rhinoceroses, but it isn't. Septorhinoplasty is a specialist nose job for people who both want to make their beak look better, and who also suffer breathing difficulties due to problems with their septum.

What is a Septum?

A septum is the thin piece of cartilage which makes up the wall between the two sides of your nose. In an ideal world, the septum would lie exactly in the middle, both allowing us to breathe freely and giving the nose a symmetrical appearance. However, it is estimated that only 20 percent of us have a perfectly straight septum, while the rest of us have one that is a bit off-kilter. Usually this doesn't matter, but in some cases it is very off-centre, and can therefore cause problems. This is called having a deviated septum, and can occur naturally or as the result of an injury.

What Happens with a Deviated Septum?

Sometimes nothing, but other times people can experience frequent nosebleeds and problems breathing as a result of a severely deviated septum. If this occurs, they may opt for surgery to fix their septum, called septoplasty. If they opt for a more radical procedure, which both straightens the cartilage and bone and also approves the nose's overall outer appearance, it is called septorhinoplasty. A nose job within a nose job, so to speak.

What does Septorhinoplasty Surgery Involve?

The first part of this op straightens the septum, the second reshapes the nose. The surgery usually takes from two to three hours and requires general anaesthesia. A small cut will be made inside the nose itself, then some of the bone and cartilage will be removed. Finally, some of the bones will be broken in your nose to reshape it.

How Much Does it Cost?

Septoplasty is available on the NHS, septorhinoplasty may be under exceptional circumstances. Privately, expect to pay £3,500 and up.

All operations, including plastic surgery, carry some risks. They include bleeding, pain, infection and blood clots. A septorhinoplasty in particular can also have other possible complications, which are rare but can include redness, scarring, nerve injury, nasal obstruction and excessive bruising. Also, you may not be completely satisfied with cosmetic result of the nose job itself.

Like any operation that is partly cosmetic, think carefully before embarking on such a big step, and decide whether it will really make a marked difference to your life. If so, do your homework, get the best surgeon you can, and think positive!